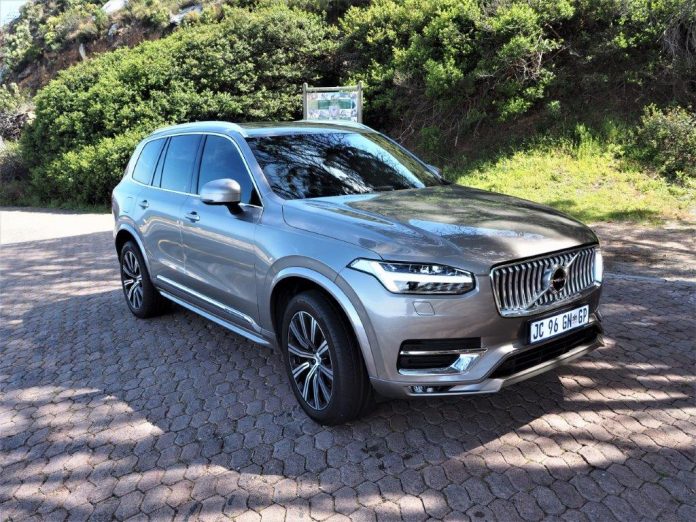 The latest model from Gothenburg to grace my driveway was the upper-end, recently tweaked XC90 T6 painted in the most fetching champagne shade that does so much to enhance its neat and simple styling that is largely devoid of any frills and attention-grabbing add-ons. Now here is a car that is awash with neat detailing, which now includes a revised grille design and flash alloys, so read on to find out exactly what sets it apart from the herd.

The fact that the paint was blessed with the most eye-pleasing gloss simply adds to the honest-to-goodness execution of a two-box shape that sports a little more chrome than might be expected. The side window surrounds are outlined in shiny stuff as is the grille, the lower reaches front, side and rear, as well as the roof rails and door handles.

If that sounds like overkill, it isn’t as the tinsel is subtly applied and blended in well with the paler colour of the test unit, albeit that darker hue would make the chrome’s presence more obvious. 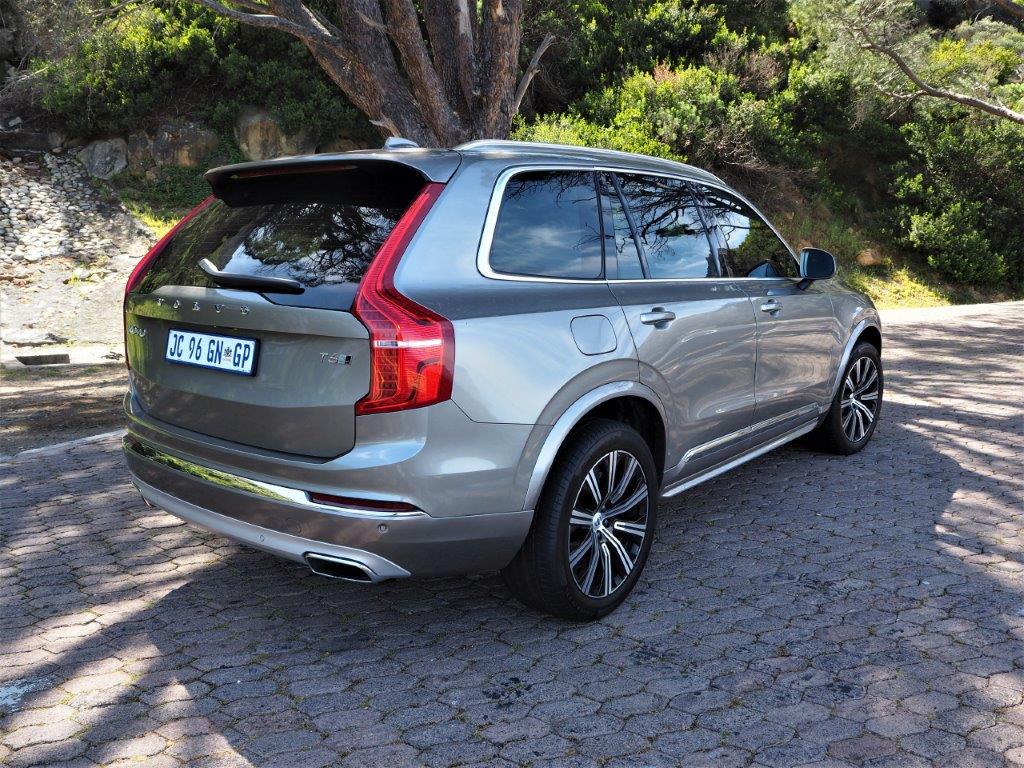 There’s no doubt that the exterior design is imposing and despite its relative simplicity, it does draw attention, and most of it is very positive. My neighbour gave this Swede the nod of approval when it arrived in my driveway, but the nod became much even more pronounced when I took him and his better half for an evening nosh some 20km away. It’s said that first impressions are lasting impressions and just as I did, my neighbour took in a deep breath to soak up the truly delightful aroma generated by the soft, beautifully stitched leather that swathes all six seats.

This test unit featured an all-black interior and while I favour the more “Swedish” paler colours on offer, the dark hue does not unduly mask the quality of the trim materials on parade. From the panelled inserts used on the dash and upper door surfaces to the high-quality carpets and over mats, to the lovely fabric that makes up the roof lining and even to the slush moulded lower door panelling, the XC90 is up with the very best. 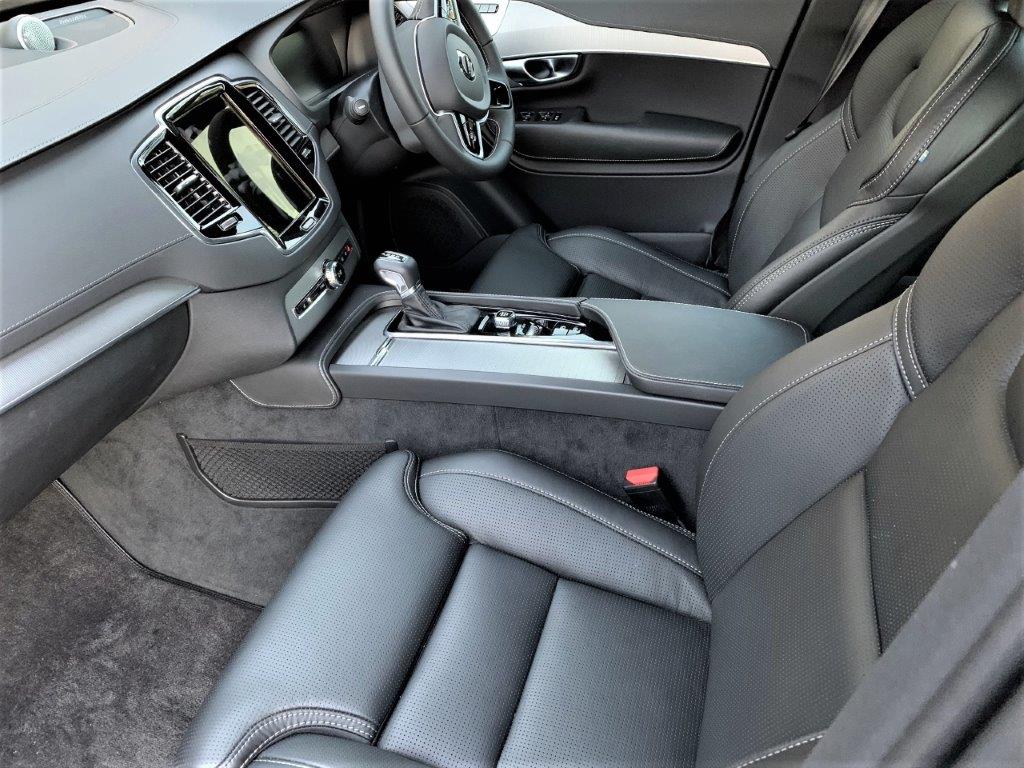 Not only do those seats look so inviting, but the front pair also provide three-way memory and reward with excellent support just where it matters. If you were paying attention, you will have seen reference to “six seats.” This is a new and very sensible option that allows access to the tail-end pews between the two separate middle row buckets. Thanks in part to the sheer size of the XC90, a model that could best be described as a Crossover, being a blend of station wagon and SUV, that third row provides more space than most of the opposition which means it’s not just a place for kids to smear their sticky treats in.

Medium-sized adults won’t feel trapped back there and what’s more, even with all seats in position, there’s still more than 300 litres of luggage space, and this can be extended so easily thanks to a wonderfully simple and variable seat folding system that releases a cavernous 1856 litres if rows two and three are liberated. 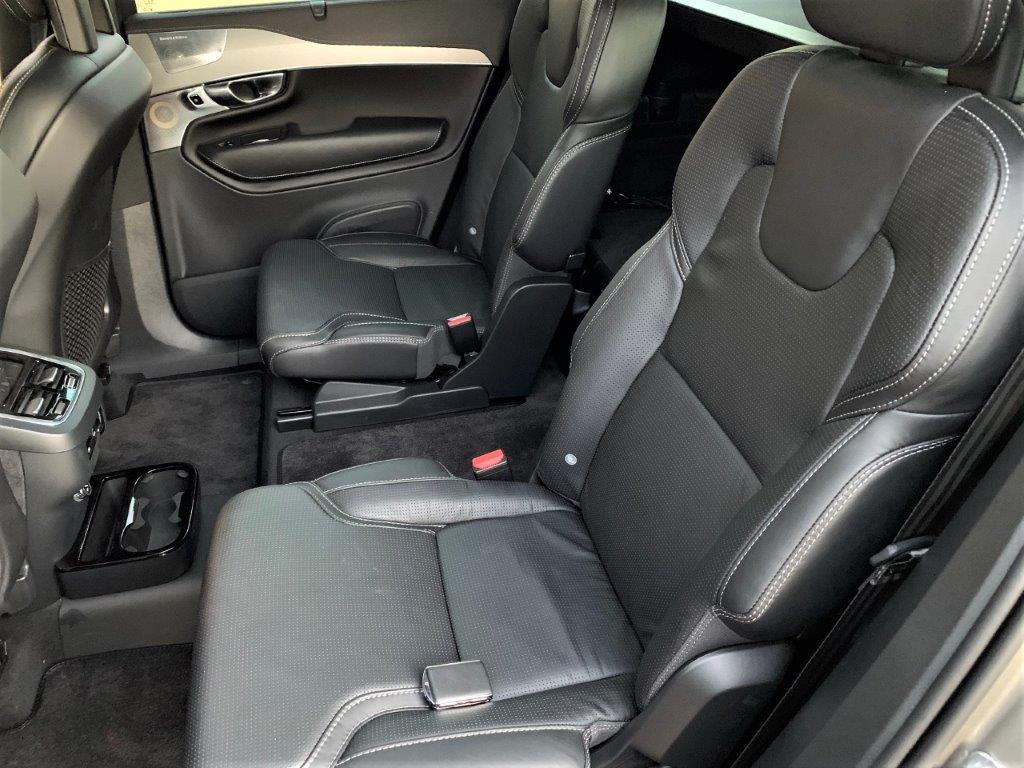 As I’ve covered various XC90 models before, I won’t go into my usual detail about every item of internal equipment other than to state that the rather-too-complex central infotainment screen – now with Android Auto, Apple Car Play and Spotify – helps immeasurably in allowing for simplicity of execution in terms of dashboard styling. Connectivity freaks will have nothing to complain about and sound geeks will love the melodious tones produced by the Bowers & Wilkins sound system. The boss of the Bank of England will also feel as safe as a house in the XC90 thanks to the almost unrivalled array of active and passive safety aids on board.

And let me say how much I appreciated the active camera system which provides an overhead view of the car’s precise position in relation to its surroundings. Given the rather impaired rear three-quarter visibility, this makes reversing an absolute cinch.

Naturally, all electrically powered mod cons are on board along with various driving modes. On the subject of driving dynamics, this big Swede is all about tranquillity notwithstanding the fact that its turbocharged 2.0 four produces an unexpectedly healthy 235kW at a mere 5 700 rpm backed up by a 400Nm torque peak that holds all the way from 2 200 to 5 400 rpm. All that muscle lurking under the imposing bonnet allows for an athletic 6.5s run to 100 and liberates a 230km/h top whack.

So, despite the bulk of the XC90, that motor never feels as if it’s having its work cut out and despite the fact that boost levels must be rather high to achieve such a healthy power output, it’s also mostly free of noticeable lag and allows for very high gearing in the wonderfully smooth 8-speed auto. As for braking, the anchors are powerful and perfectly weighted and never seem taxed dealing with such a large vehicle.

This test unit ran on lovely black and polished alloys wrapped with huge 275/45 R20 rubber. Despite the relatively low profile, and maybe thanks primarily to the use of air suspension, the XC90 provides a lovely cushioned ride that’s not achieved at the expense of body roll. Road roar, even on coarse tar, is subdued as is wind noise and provided the extremes of the considerable engine performance are not exploited, mechanical commotion is also deflected with aplomb.

Heaven forbid that anyone should want to take such a beautifully executed vehicle off the straight and narrow, but I guess that’s what a Crossover/SUV is all about, so the presence of AWD will be a boon to those with a more adventurous spirit. What’s more, the relatively high riding chassis will ensure that pretty nasty obstacles won’t stand in the way of the XC90.

Premium is a word that’s so over-used in the motoring context but it’s a descriptor that fits the XC90 quite perfectly, especially as there’s nothing flash-harry about the disposition of this model. There’s an element of simplicity and understatement at play along with a cosseting interior design execution that separates the Swede from its (primarily) German rivals.