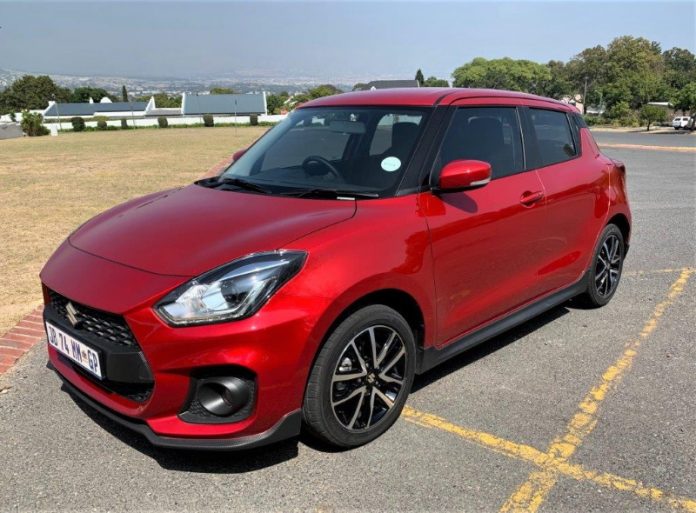 Long-term readers may recall that back in the dim but not so distant past, I had a Suzuki Swift Sport in my personal wheeled armoury, having selected it as appropriate transport for my wife who had a preference for smaller vehicles. Having said that, a lower end 1.2 Swift would probably have been entirely fit for madame’s purposes so I admit that the (last generation)1.6 Sport derivative was a sop to my own preferences, albeit that my extensive reading had identified this version as the sweet spot of the Swift range.

Indeed, this diminutive hatch proved to be an admirable choice, being totally reliable and a hoot to drive provided the revs were kept in the upper stratosphere as torque was not its strong suit. It was also endowed with a nimbleness that I doubt my wife ever knew about.

Now zoom the clock along to 2019 and Suzuki’s SA importers announced the rather delayed arrival of a new generation, lighter-still Swift Sport, now with a lot more huff and puff thanks to the presence of a turbocharger bolted to a down-sized 1.4 motor. My first experience of this model was on a race track in the Dalmas district and although punting a car at its limits can be awfully entertaining, it doesn’t telegraph too much about likely on-road performance, so come 2020, I was really glad of the opportunity to be handed a metallic red example for a week’s assessment in the real world.

This latest incarnation looks little different from the original, bar a lower, wider frontal execution – that I don’t think looks as chunky as the original – and a more bloated tail with huge lamps that sweep into the rear fenders, these being the most obvious differentiators. There’s a more attractive range of colours on offer too, my favourite being the metallic red that adorned this very example. 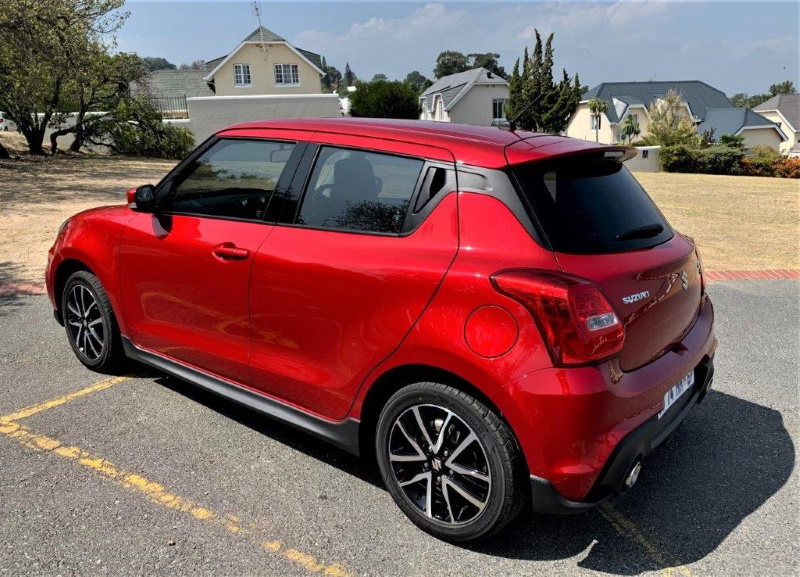 I took an instant shine to the gloss levels on display. Certainly, those tasked with assembling this Swift took good care of panel alignment as all four doors, the tailgate and the bonnet fitted with commendable precision. As a result, the doors opened and closed nicely and thanks in part to the fitment of dual seals all round, wind noise was rebuffed with aplomb.

As ever with Suzuki, the front seats are heftier than might be expected, being nicely shaped and supportive, and along with the tightly packaged split bench in the rear, the patterned cloth inserts incorporate red flecks to complement the red stitching. I rather liked the red and black trim inserts used on the upper and lower dash and the front doors, items that signalled this is the Sport version, and it was good to see plated interior release handles on all doors. 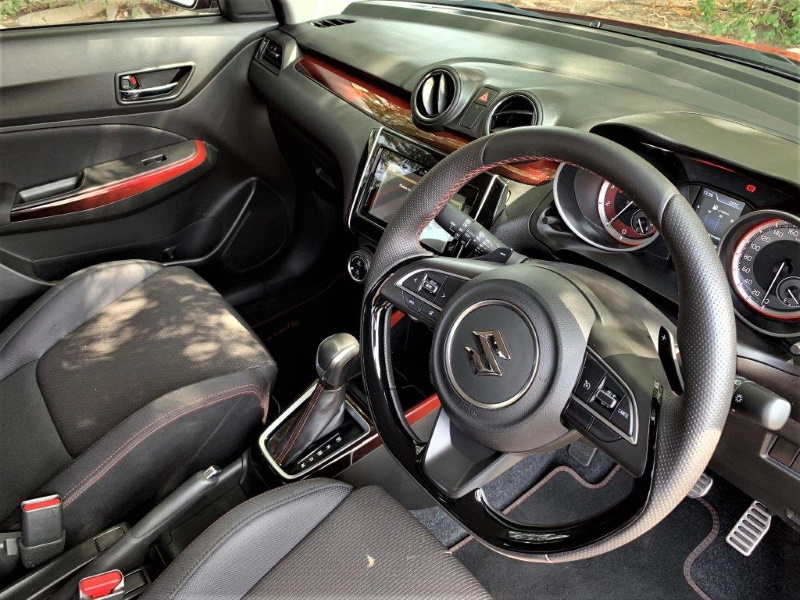 So how does this pared down 970kg Swift Sport shape-up in terms of driving dynamics? Happily, the answer is “extremely well.” First off, there’s a complete character change from the previous 1.6 normally aspirated iteration which required lots of revs to get the best out of it. Now, despite an increase of just 3kW to 103kW, the torque output has leapt by 70Nm to 230Nm accessible from just 2 500 rpm, with the result that there’s attainable thrust on tap pretty well all the time. 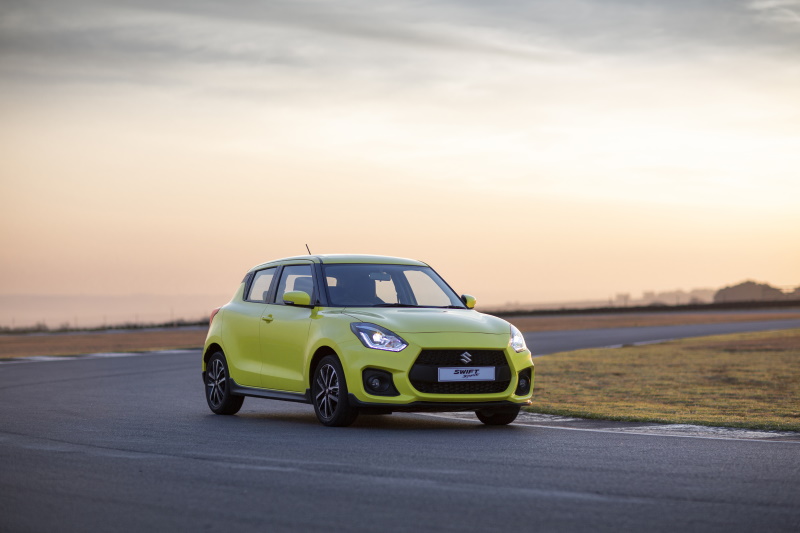 Turbo lag is virtually non-existent and thanks to a 6-speed auto transmission (this is an optional extra) that shifts rapidly and with commendable smoothness and which offers paddle shifters together with manual override, the engine is kept in its sweet spot in perpetuity. The biggest complement I can pay this under-stressed engine is that it masks typical turbo weak points, such as lag, but provides all the benefits, not least low revs at cruising speed which helps hugely in achieving an impressive overall economy reading of 6.9l/100km over a week’s usage.

Even if it carries the same badging and looks much the same as its predecessor, I reiterate that this latest forced-induction version is a much more mature machine. There’s absolutely no need to wring its neck – it gets to 100 in around 8s and goes to 200+ km/h, by the way – to stay ahead of the traffic so the overriding feel is of a much calmer but even more effective operator. At lower speeds, there is a just detectable husky tone emanating from the two chromed exhaust outlets and much less mechanical fuss invades the cabin, but having said that, at full chat the small four can sound a lad strident but never invasive. 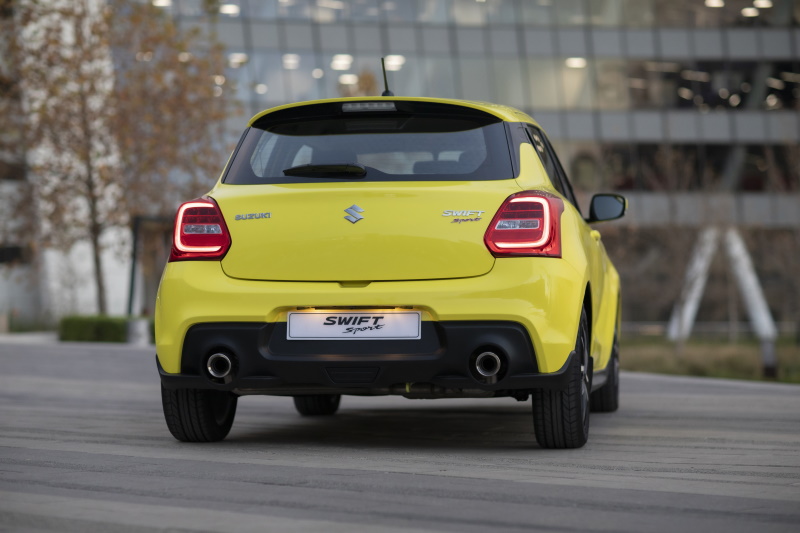 Maybe slightly more decibels from the exhaust wouldn’t go amiss given the Sport badge but there’s no need to fiddle with anything as far as steering and suspension go. The MacPherson strut/torsion beam set-up errs a tad on the side of firmness but still retains sufficient pliancy to remain comfortable on partly broken surfaces. Probably the rather mildly profiled 195/50R16 tyres wrapped around smart duo-tone alloys help here. Rebound control is excellent and roll is shrugged off with determination in hard cornering when steadfast grip is exhibited.

Straight line tracking is also exemplary, and the feel and weighting of the steering is perfectly judged. Gearing is pretty direct, but not so much so that the helm feels darty, and at speed there’s a reassuring firmness on hand along with a good measure of feedback that telegraphs just what the driven front wheels are doing. In many applications, the assistance offered in the steering department is invasive but not here. If it weren’t for the ease with which parking manoeuvres can be carried out, you’d barely know the system is powered. 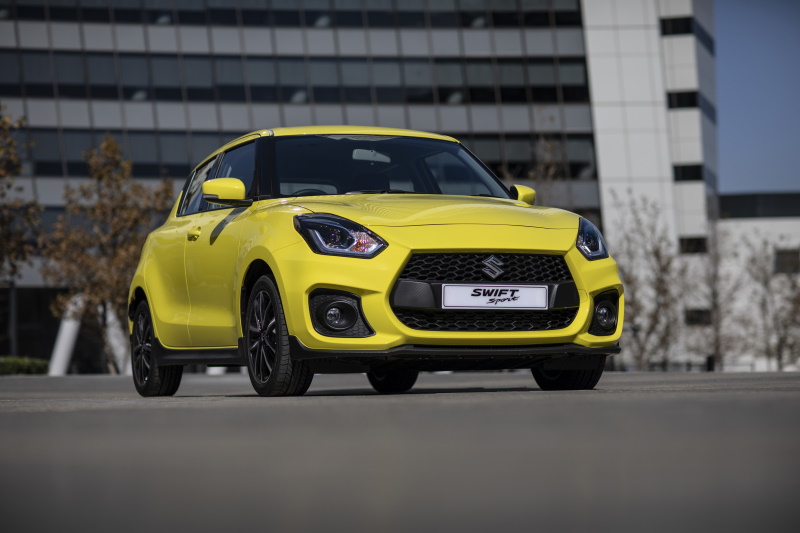 Braking is provided courtesy of discs all round and even if there’s a tad too much boost delivered at low speeds, the retardation levels are reassuring and there seems to be plenty in reserve courtesy of system that incorporates ABS, EBD and more.

All this should tell you that the latest Swift Sport is a super driving machine that delivers even more thrust with a lot less fuss than before. Purists might guffaw if I state that the turbo engine combines beautifully with the auto transmission, but this would be my personal choice. Add in excellent chassis control and frugal use of fuel and you have a rewarding piece of kit in dynamic terms.