Executive Mayor, Melvin Naik today thanked all stakeholders and the affected communities of Wilderness and surrounds for their role in the massive undertaking to replace the main water supply line which runs across the Kaaiman’s Railway Bridge after two sections of the pipeline fell into the river on Sunday 6 October. Last week in a statement, Ald Naik had expressed his concern for the affected  consumers reiterating that the Civil Engineering Department was doing everything possible to resolve the matter as quickly as possible but that the co-operation of the water users in reducing their daily consumption was vital throughout the process. “I was extremely gratified that the repair was completed a day earlier than predicted, Friday 18 October and we were able to stabilize the water system for the entire Wilderness area over the past weekend. Service delivery remains a high priority for the George Municipality and the success of this repair was down to strong inter-governmental relationships and collaboration,” said Ald Naik. 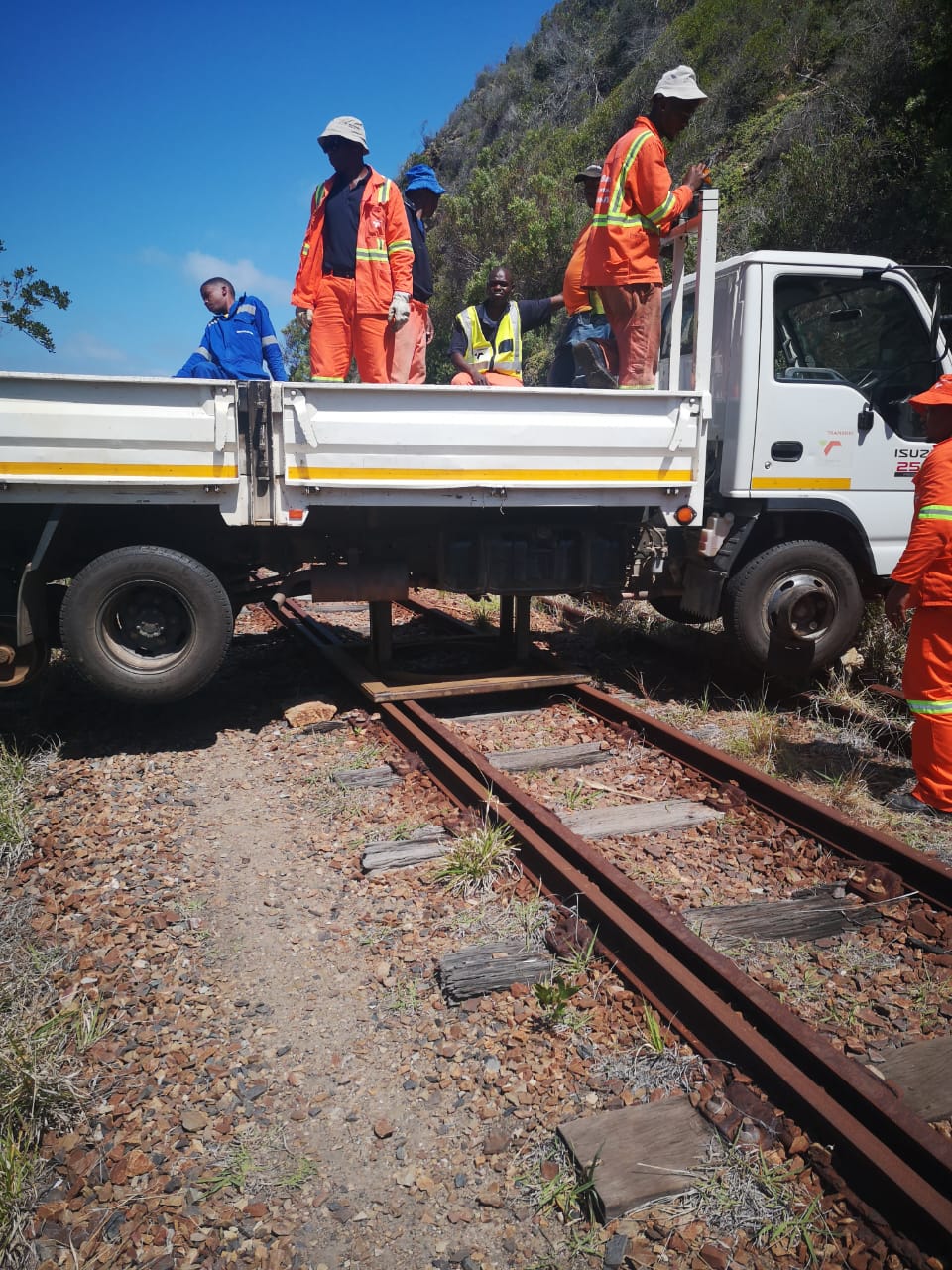 Given the location of the repair, intensive pre-planning was required including the necessary permissions for the access to and installation of the pipeline on the bridge which had to be obtained from Transnet, owner of the bridge. Transnet also assisted by allowing the use of the railway line and providing a rail truck and trolley for the transporting of the materials and equipment from the level crossing near Carmel to the railway bridge. The rail truck is a modified truck that can operate on both road and rail.

The bridge and access to the bridge was inspected and a Safety Report and Plan was compiled and submitted to the Department of Labour. The safety plan required that safety clearance be given for the bridge by a structural Engineer. The plan stipulated in detail the required safety measures for the execution of the work. Working on Fire provided their High Altitude teams (HAT) to install the safety measures on the bridge before the actual installation of the pipeline could commence. Public access to the bridge is and remains prohibited due to the unsafe conditions and the bridge remains blocked off at each end with Transnet signage to that effect which remains in place. 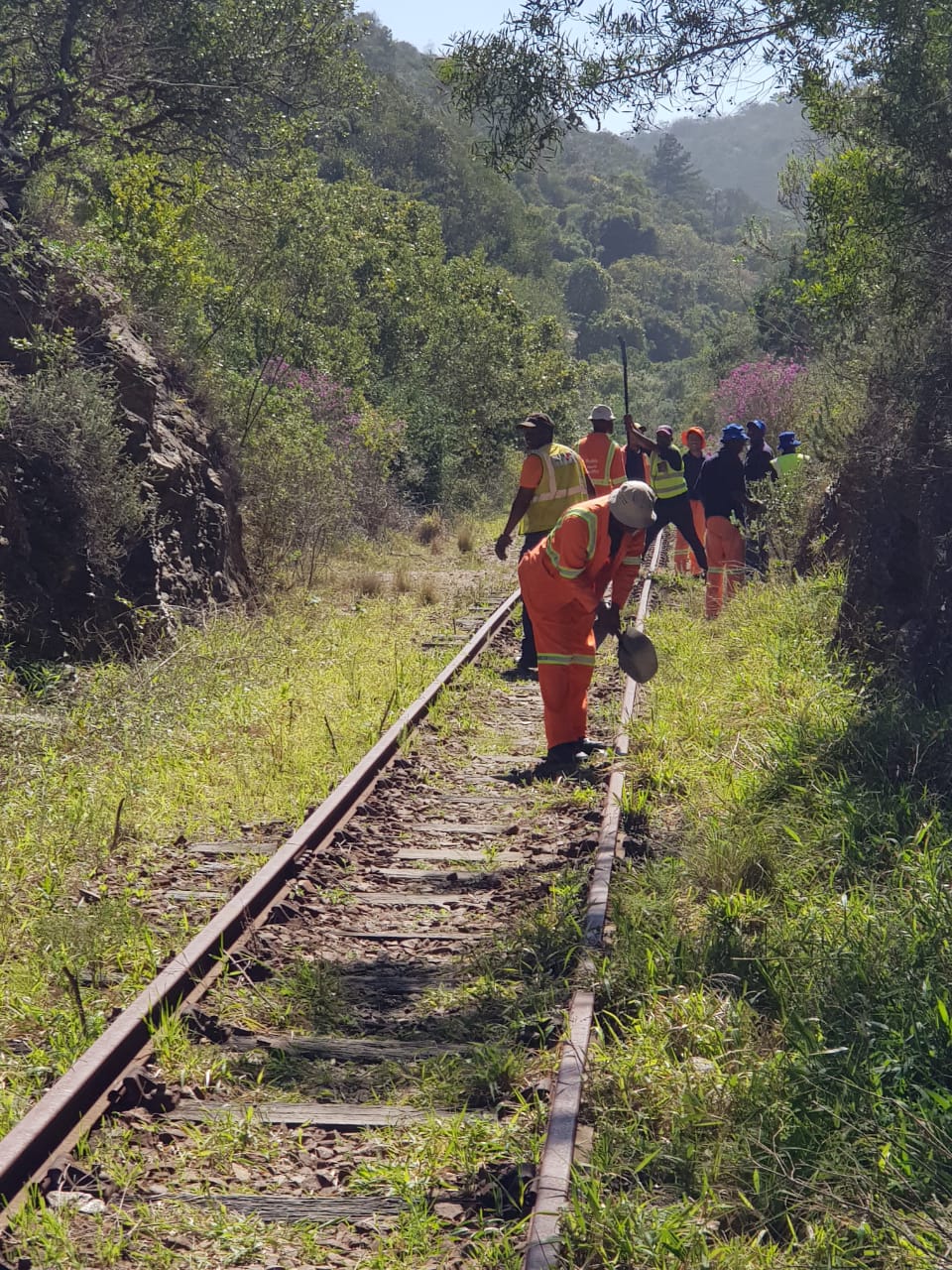 The walkway to which the existing pipeline was attached, is heavily corroded, and caused sections of the pipeline to fall off the bridge. The safety conditions, height and wind factor meant that only the Garden Route District Municipality High Altitude team was cleared to access the bridge and they were given basic training in the installation and laying of the pipeline. The length of pipeline installed is 180m, i.e 30 x 6m lengths that were fusion welded together with each pipe length weighing about 110kg. The steel piping was replaced with HDPE piping (high-density polyethylene) which has a high level of impermeability and a strong molecular bond making it suitable for high pressure pipelines. The installation of the connection to the existing pipeline was done by the main contractor, Qualcon Civils, who also cleared the railway line from debris and overgrown vegetation, provided the training to the GRDM HAT team and provided security at the site.

The temporary pipeline has been installed between the rail tracks, as the walkway to which the existing pipeline was attached, is heavily corroded, which caused sections of the pipeline to fall off the bridge.

The Water Treatment Works in Wilderness has a fixed production capacity for treated water and is augmented by the supply of water from George along the railway bridge and Wilderness Heights was the first and worst affected by the incident. The monitoring of the water levels in the 6 reservoirs that service the Wilderness area was a 24 hour job during the 13 day period and initially three water trucks were deployed to provide water to the Wilderness Heights area. As the affected area increased, five water tanks were installed in the Wilderness Heights area and the fleet of trucks was increased to six. At the height of the crisis, the different zones in Wilderness and surrounds were subjected to intermittent water supply, in order to ensure that the available potable water supplied from the Wilderness Water treatment Works was distributed equitably.

Director for Civil Engineering, Regenald Wesso thanked the Wilderness residents, the Executive Mayor, Ward Councillor Marlene Barnardt and the Municipal Manager Trevor Botha, for their patience and support during the 13 day period, which allowed the relevant teams to complete the work as quickly as possible. “Our extreme gratitude and thanks goes to all who assisted selflessly on this repair project. Without the input and harnessing of skills of various individuals, companies and institutions and the level of dedication displayed by our officials, a task of this magnitude would have been almost impossible” said Mr Wesso.

Henry Jansen, Deputy Director Water and Wastewater for George Civil Engineering Services, ran as the lead on the repair project and lauded the collective efforts of his internal teams, the Wilderness Water Treatment Works officials, the water tanker drivers and water tank teams for their application of the Batho Pele principles and their patience and endurance during a period in which they worked under extreme pressure and long hours.

Municipal Manager, Trevor Botha noted special thanks to Transnet; the Garden Route District Municipality Disaster Management and Working on Fire HAT teams; the George Municipality Fire Department, George Municipal Communications Department, OHS Inc, Uhambiso Consult, Qualcon Civils and DPI Trading .  “Going forward we have no detailed future plans available at this stage, but the investigation is at an advanced stage and a report is expected in due course,”said Mr Botha.