51 years ago Toyota launched its Hilux bakkie globally, but South Africa had to wait another year before it came to our shores. It was an immediate success for the Japanese automaker and did it, over the next five decades, establish itself as the number one bakkie among buyers. To celebrate the Hilux’s fiftieth year in South Africa, Toyota launched two very special bakkies: the Legend 50 and the Hilux GR Sport.

Building on from the likes of the Legend 45, Legend 40 and Legend 35 – the latter launched 15 years ago! – the Legend 50 is a special bakkie designed and produced to commemorate fifty very special years. The enhancements are largely cosmetic and does the Legend 50 feature no changes to the power- and drivetrains. A different grille, fog lamps, enhanced side protective mouldings, smoked tail lamps, a tow bar, 18-inch all-terrain tyres, and Legend 50 decals have been added to give the bakkie that special differentiation from other models in the range. 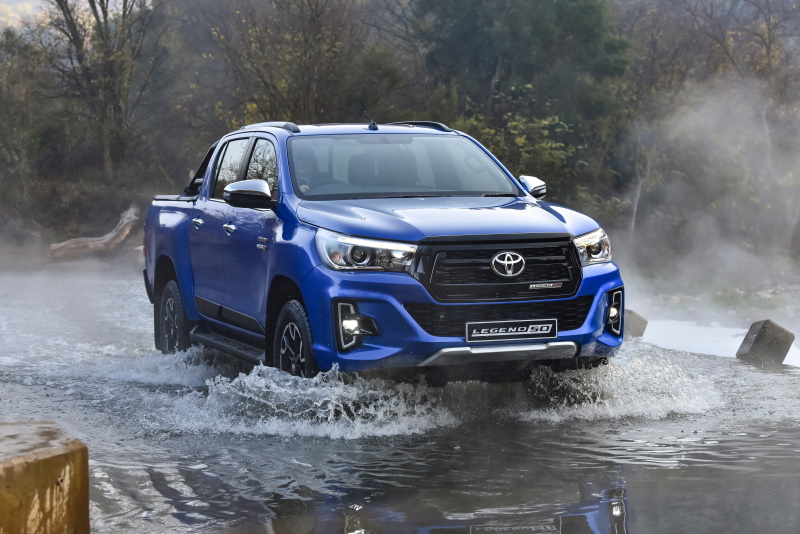 The Legend 50 treatment has only been added to the 4.0-litre V6 4×4 double cab auto, as well as the models powered by Toyota’s turbocharged 2.8-litre diesel engine, all comprising single-, Xtra, and double cab bakkies. Power outputs have been left unchanged at 130kW and 420Nm (450Nm on automatic models). Buyers still have the option to have their Hilux Legend 50 in either 4×2 or 4×4 guises.

Knowing that the Hilux is South Africa’s favourite vehicle, it should not come as too much of a surprise to see a couple of Legend 50’s at your nearest watering hole. This bakkie looks the part and will it undoubtedly find favour amongst a large portion of our motoring public.

The other bakkie Toyota launched with the Legend 50 is its Hilux GR Sport. The GR Sport is a tip-of-the-hat to Toyota South Africa’s victory at the 2019 Dakar Rally and is the bakkie only the second vehicle after the Yaris GRMN to receive the Gazoo Racing treatment locally. Though, like the Legend 50, the 2.8-litre diesel engine has been left untouched, Toyota did upgrade the Hilux GR Sport’s suspension.

Bespoke Gazoo Racing suspension has been fitted to the bakkie, and the shock absorbers feature a monotube design with revised damping. Toyota says it also increased the front spring rates for a sportier ride, but that it didn’t sacrifice ride comfort. Seeing that the Hilux is a workhorse, the rear spring rates have been left unchanged to keep the bakkie’s payload.

Visually the Hilux GR Sport is a lot more appealing than the rest of the Hilux range, but unlike the Legend 50 it rides on 17-inch wheels, coming specifically from the GR garage.

And if you thought of acquiring one, sadly only 600 units were built and all 600 are already accounted for. Toyota maintained exclusivity with the Hilux GR Sport and offered the bakkie in double cab guise only, driven by the six-speed automatic gearbox that’s mated with the 4×4 system.

All Hilux models come standard with a three-year/100 000km warranty, as well as a nine-services/90 000km service plan. Customers can also purchase extended service plans via their Toyota dealer.